Will & Kate: Over the Rainbow – “A beautifully relaxing album to listen to” (Corin & Stephen Nelson-Smith, Expressive Audio) 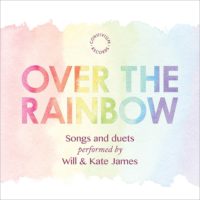 Over The Rainbow is not only a song that has become synonymous with supporting the NHS during these challenging times, but is also the debut duet album between two young choral protégés, siblings Will and Kate James.

The album, released on the 4th December 2020, could not have come at a better time to lift the spirits of the nation. Featuring classic heartwarming pieces such as Simple Gifts, You Raise Me Up, and, unsurprisingly, Over the Rainbow, as well as familiar carols including O Little Town of Bethlehem, arranged intimately for voice, cello (Sarah Butcher) and piano (Malcolm Archer).

Both Will and Kate’s classical music education comes across beautifully in not only the purity of their young voices, but also more subtly in the diction, intonation and emotion that is so often lacking in musicians of this age. It is easy to forget that they are only 13 and 14 respectively when listening to the masterfully performed pieces. It is one thing to sing a gorgeous solo piece, but what is arguably more impressive is the maturity and cohesiveness with which they duet.

Will studies voice at the Junior Royal Academy of Music, and is currently Head Chorister of King’s College School Chamber Choir and Hampton Court Palace Royal Choir. Kate too studies voice at the Junior RAM, however also sings regularly with the Lady Eleanor Holles Singers.  The siblings both boast an impressive array of other performance credits, including both singing in the 2018 performance of Hansel and Gretel in the Royal Opera House, performances in Buckingham Palace and St Paul’s Cathedral, as well as both being finalists in the 2019 BBC Young Chorister competition.

The combination of the siblings’ near indistinguishable voices, along with the sublime piano playing of Malcolm Archer make this a beautifully relaxing album to listen to. I am listening to the album streamed from Quobuz via Roon in 96/24 format, through the Parasound 200 Pre in fixed output DAC mode, and finally into the Ming Da Dynasty Octet Valve amplifier via Van Den Hul ‘The Rock’ cables, before leaving a pair of Opera Grand Mezza speakers. The higher than CD Quality 96kHz 24bit FLAC files, plus the natural warmth from the valves allow me to hear with breathtaking clarity the resonance and delicate texture of their voices, in a testament as much to the quality of the recording by Convivium Records as it is to the musicians themselves.

The track that stood out to me the most was without doubt number seven, Were You There, a traditional song published in 1899 recalling the Easter story. In this wistfully spiritual arrangement by George Arthur for treble, soprano and two pianos, both Will and Kate’s mastery of their art is demonstrated, effortlessly switching between head and chest voices due to the large melodic range, as well as delivering multiple difficult sustained suspensions. Take note in particular of the impressive clarity in the trilled ends of the word ‘tremble’, an excellent example of the composer using word painting to bring the music to life. It is easy to make a trill sound mechanic or forced, however both Will and Kate deliver the text with astonishing maturity and emotion. The use of echoes between the voices and angelically high soprano harmonies also comes across wonderfully on a good HiFi system, allowing the penultimate sparse verse to really stand out against the final joyful tutti celebration of Jesus bursting forth from the tomb.

It was a pleasure to listen to this album, and with every song I found myself worrying less about the issues in the world at large, and allowing myself to simply be in awe of the astonishing musicianship and performance that Will, Kate, Malcolm Archer and all the recording and producing team have come together to create. Will and Kate are clearly rising stars, and I think that regardless of natural talent, the amount of work, determination and willpower involved in being that good at that age is colossal and they will undoubtedly go far in the choral world.