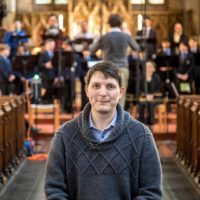 Convivium Records is a relatively young record label, developing an interesting and eclectic catalogue with a significant choral bent, and a lively mix of music including a number of contemporary composers such as Dan Locklair, Gabriel Jackson and Oliver Tarney, as well as discs of the contemplative, spiritual music of Margaret Rizza. The label was founded by Adrian Green, himself a singer and the label’s Managing Director. I met up with Adrian to find out more about the label and its development.

I first asked Adrian how he would define Convivium. His, perhaps surprising, response was the Convivium was effectively a self-publishing label; it exists to help artists who have a vision, to help them realise & share this vision to the highest possible standards. Whilst the majority of the label’s work is on discs issued commercially under their own imprint, they also help artists and ensembles make artistic productions which are released privately. During our conversation Adrian regularly returned to the difference between artistic productions (which might have limited commercial value) and commercial productions (which might have limited artistic value) and how Convivium aims to tread a line between the two.

They work with a lot of young up and coming artists and have been known to take releases which were intended as a purely private ones and issue them commercially, if they fit the company’s ethos, again coming back to the balance between commercial and artistic values.

The problem with self-publishing in any field is the suspicion that there is little or no artistic control over the works being published. Later in our conversation Adrian explained that they never issued anything commercially which he could not wholeheartedly endorse. He needs to believe in the work to be able to sell it honestly and wholeheartedly.

For products which are good and commercial but which do not fit with Convivium’s narrative, they help artists realise their own vision and has in the past helped set up a label. Adrian’s essential message is that they want the discs to go into people’s hearts and for them to love it, and you cannot do this if the product does not connect with you.

One area where the company has done a lot of work is in private recordings for schools, where there is no benefit for a commercial release but where they provide high quality support and production to bring the client’s vision to completion. This link is, however, still noticeable in the catalogue with discs from ensembles like Winchester College Choir, and Portsmouth Grammar School Chamber Choir.

Adrian Green is himself a singer, studying at Royal Holloway College. But he always had a fascination for recording, and was intrigued by the way you make something sound the way it does, and he still thinks the biggest challenge is to find the sound the artist is looking for. Whilst at Royal Holloway he sang in the chapel choir where they did a lot of recordings. His course included technical aspects of recording, and he aspired to help other artists share their music. When he left University he went to Portsmouth Cathedral Choir, and one of Convivium’s first recordings was of the choir. It was something of an experiment, recording them in three different parts of the cathedral.

He found that there were a lot of young artists who aspired to share their music, but were not major enough to go to on of the bigger labels, so there was an opportunity to offer high quality services. To create a record company was not an immediate decision, it was something he found he could do. He started working with talented friends, and the label’s art director and sound engineer were both people he started working with from the very beginning and the label now has a committed team.

One the label’s most successful discs has been Margaret Rizza’s Officium Divinum, their biggest budget disc and a collaboration with the Royal School of Church Music, the disc goes beyond purely musical values as many people use Rizza’s music as an aid worship and meditation in their daily lives.

The disc uses the Convivium Singers, a group which Adrian co-founded with conductor Alexander Norman at the same time as founding the label. Like many similar ensembles, the choir came about because they had a lot of friends who sang to a high standard and wanted to continue singing together after leaving university. And they were key in a number of Convivium Records early recordings.

Adrian admits that you cannot always tell whether a disc will sell, and that you have to learn and use the mistakes of the past. When I ask whether they have made mistakes, he laughs and says plenty.

It isn’t just musical values that are of concern, Adrian thinks that artwork is extremely important, their designs are striking and colourful, and many are bespoke. And when people do listen to a disc, he hopes that the recording will convey a sense of balance, space and clarity. For Adrian, space is very important in recordings and is something the company takes a lot of care with.

With regards repertoire, the ‘don’t release boring bland music’, and Adrian intends that discs will engage people and evoke an emotional response.

A lot of the music they record is new, and this can sometimes help generate an audience for the discs. Oliver Tarney’s Magnificat (see my review) had several performances and the Convivium recording was bought by singers wanting to learn the score. People also simply buy music to broaden their horizons, Adrian things their disc of contemporary Christmas music did well for this reason. And of course, people related to the artists and the ensembles form a key element in the audience for a disc.

Adrian admits, though, that the CD market is undoubtedly getting smaller, and the label’s digital sales are going up. In the last few years they have streamed more than 250,000 tracks (Adrian smiles and comments that someone must be listening to their stuff). At the moment a physical CD is still part of the artists’ vision, and as Adrian sees the label’s role as helping artists to realise their vision, CDs are still in the equation. But he admits that digital recordings have the advantage of far fewer overheads.

Adrian feels that you cannot know too much about the business, that the latest trends and developments are important. In order to be successful, he has to understand both the label’s artists and their public and try to connect them both, rather than favouring one at the expense of the other. Regarding the future, he looks forward to working again with established clients (many return each year with a new recording), as well as forming new partnerships.