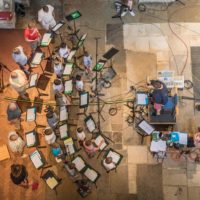 Romsey Abbey Choir can trace its roots back to 1869 when a robed choir of men and boys was introduced in response to the Tractarian fashions of the time.

A healthy choir, rooted in the Anglican Tradition continued throughout much of the 20th century. In 1997 a top line of Girl Choristers was incorporated into the choirs at the Abbey, and they now sing with the altos (male and female), tenors and basses on alternate weeks. In 2016 the boys’ line enjoyed something of a renaissance, with 24 choristers filling the choir stalls and a separate training choir established to cope with the demand. There are over 120 singers engaged on a weekly basis at Romsey Abbey. These include the Boy Choristers, Senior and Junior Girl Choristers, choir adults, the Quavers training choir and the Abbey Consort.

The choir has broadcast on BBC Songs of Praise and has toured widely. The 2016 CD release of Adoration, celebrating 20 years of the girl choristers at Romsey Abbey, won widespread critical acclaim.