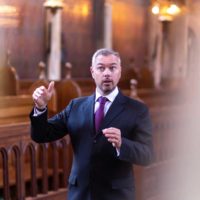 Rupert Gough has been Director of Choral Music and College Organist at Royal Holloway, University of London since 2005. He is also Organist and Director of Music at London’s oldest surviving church, Saint Bartholomew the Great, which maintains a professional choir. At Royal Holloway Rupert has developed the choral programme to include weekly choral recitals, choral conducting courses for undergraduates, frequent new choral commissions and transformed the Chapel Choir into an elite group of 24 choral scholars. The Choir has particularly come to prominence through their series of recordings for Hyperion Records. Their recent recording of the music of Ola Gjeilo for Decca Classics was top of the US and UK classical charts. The choir is now in demand for recording work from a variety of record labels, composers and orchestras and travels widely for concert performances.

Rupert was a chorister at the Chapels Royal, St. James’s Palace, and won a scholarship to the Purcell School. He received (with distinction) a Masters degree in English Church Music from the University of East Anglia whilst Organ Scholar at Norwich Cathedral. Read more

For 11 years he was Assistant Organist at Wells Cathedral during which time he made around 30 CD recordings as accompanist and director.  Rupert has worked with a variety of professional ensembles including the BBC Singers, King’s Singers, Britten Sinfonia, London Mozart Players and Tallinn Chamber Orchestra. He regularly conducts and commissions new music for concerts and recordings. This year he is recording the choral music of George Arthur and a new Oratorio by Carson Cooman with the London Mozart Players.

As part of the choir’s 50+ concerts a year, they regularly collaborate with and perform alongside many famous ensembles. These have included the King’s Singers, the BBC Singers, Britten Sinfonia, London Mozart Players, Onyx Brass, Fretwork and the jazz-trio Acoustic Triangle, with whom they broadcast live on BBC radio. The group also celebrates the work of living composers, and have commissioned works from Sir James MacMillan, Gabriel Jackson, Richard Rodney Bennett, Cecilia McDowall and Paul Mealor. The choir’s diverse repertoire also includes larger-scale works including Vespers by Monteverdi, Rachmaninov and Rautavaara, Requiems by Mozart and Howells, and Gabriel Jackson’s Ave regina coelorum for choir and electric guitar which they also broadcast live on BBC Radio 3. Festival engagements have included the Spitalfields Festival, the Three Choirs Festival, the Windsor and Swaledale festivals, the Cheltenham Festival (with alumna Dame Felicity Lott and the City of London Sinfonia), and numerous residencies at the Presteigne Festival.

International performances are also an integral part of the choir’s work. They have toured most European countries, and have been broadcast on national television and radio all over the world. A tour of all three Baltic states saw the choir performing in the Latvian Song Festival with the Tallinn Chamber Orchestra, in a concert (sung in Estonian) broadcast nationally on the Estonian Day of Independence. Further afield, the group has visited Beijing and had a number of successful tours to the US and Canada. The choir regularly sing at high-profile events which have included the Annual Festival of Remembrance at the Albert Hall (live on BBC television), an awards ceremony at Buckingham Palace, and for the Magna Carta 800 celebrations, in which they performed a new work by John Rutter in the presence of HM the Queen and the Archbishop of Canterbury. More recently they sang at the wedding of Ellie Goulding and Caspar Jopling at York Minster.

The choir are much in demand for recording work with orchestras. A live concert recording of Beethoven’s Ninth Symphony with Thomas Adès and the Britten Sinfonia is due for release from Signum Records. The choir has also recorded James Francis Browns The Heavens and the Heart with Orchestra Nova and Joanna Marsh’s cantata The Pearl of Freedom with the London Mozart Players, with whom they will be recording again in 2020. Future projects include a premiere recording of Dan Locklair’s Requiem with the Southern Sinfonia.

The choir has an extensive and highly acclaimed discography with Hyperion, Decca, Signum and Naxos amongst others, and has one of the busiest recording schedules of any collegiate choir. Recordings include music by 16th century composer Peter Philips with the English Cornett & Sackbut ensemble, contemporary American choral music by René Clausen and Stephen Paulus and madrigals from Victorian England. The choir is renowned for their performances of Nordic and Baltic music, and has recorded works by Vytautas Miškinis, Rihards Dubra, Bo Hansson, Tõnu Kõrvits (with the Britten Sinfonia) and Ola Gjeilo to great acclaim. The 2018 release Winter Songs with Gjeilo was No. 1 in the UK and US classical charts. Upcoming releases feature the music of Ben Parry and Joanna Marsh, a live concert recording of Beethoven’s Ninth Symphonywith Thomas Adès and the Britten Sinfonia, and a recently rediscovered work by Pierre Villette with alumna Sarah Fox. Future projects include works by George Arthur, as well as a second cantata by Carson Cooman, following on from the success of Revelations of Divine Love, commissioned and recorded by the choir in 2009 and premiered in Cadogan Hall.
chapelchoir.co.uk