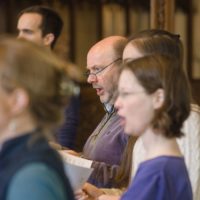 Sarum Voices was born out of necessity when a visiting choir failed to arrive at Salisbury Cathedral. Such fun was had on their first outing that other performance opportunities were sought, and the choir has now recorded numerous CDs (notably Juxta Crucem and A Ceremony of Carols, both of which received rave reviews on BBC radio 3), toured Europe and South America, and performs regularly in Salisbury and across the country for weddings and concerts.

Many of our singers were originally choristers at Salisbury Cathedral, but over the years we have broadened the net to include other like- minded musicians.

For several years we have made Sarum St Martin our spiritual home, and we return to the church for at least one concert per year, and is our recording venue of choice.