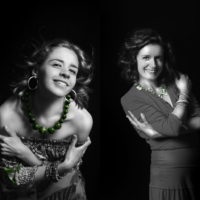 ArtPianos duo was founded in 2010 in Gliwice, Poland, by Małgorzata Jackowska and Irena Jakuboszczak (now Irena Powell). The two pianists were introduced by a mutual friend – a composer from Lviv – Ulyana Biłan-Leżańska – in the marvellous Kawiarnia Z Pasją (Café With Passion) in their home town, and they decided to play together there and then.

Irena Jakuboszczak studied at the Karol Szymanowski Academy of Music in Katowice with Joanna Domańska.

Małgorzata Jackowska studied at the Academy of Music in Kraków with Danuta Mroczek-Szlezer, including a post-graduate chamber music programme. After their studies both pianists took up teaching posts and were active as chamber musicians. The duo’s choice of repertoire reflects the performers’ wide musical interests and, as such, ranges from music originating in the Balkans to South America including the chorô tradition of Brazil.

Art Pianos: New York to Buenos Aries – “Some CDs are hard to review but easy to summarize, and this is one of them. It’s a lot of fun!” (Music web International)