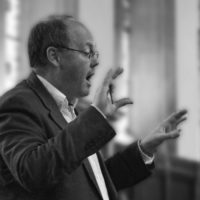 Christopher Watson studied music at Exeter University, and went on to hold Lay Clerkships at Durham Cathedral, Christ Church Oxford and Westminster Cathedral. He has over twenty years’ experience of singing at the highest level and has worked with many of the finest choral directors in the world. He is also an accomplished singing teacher and has a burgeoning reputation as a director and conductor.

Christopher’s conducting experience started in Exeter, where he ran the University Chapel Choir, and he went on to run Durham University Chamber Choir and the Arcadian Singers of Oxford. He has taught on the Tallis Scholars Summer School, leading consort workshops and directing Compline. Since 2006 he has run the Oxford-based choir, Sospiri. Under his direction, Sospiri have performed in the UK, France and Italy, and recorded five CDs to critical acclaim. The choir have also become recognised for their performances of plainsong: including a reconstructed pre-Reformation Vespers and Compline in Oxford, and the complete Tridentine Rite for Holy Week in Trieste. Sospiri sing Latin Vespers every term in Merton College, Oxford. Christopher’s interests stretch from Medieval repertoire to contemporary music, and Sospiri have given several premieres, most notably works by John Duggan, the choir’s co-founder.

Recent solo performances have included Bach’s Christmas Oratorio with Le Concert Lorrain, his Köthener Trauermusick with the Lautten Compagney, broadcast by Deutschlandfunk, and Purcell’s Ode for St Cecilia in the Concertgebouw in Amsterdam with the Gabrieli Consort. He has given many performances of the Evangelist role in Bach’s St John and St Matthew Passions – most recently in Christ Church Cathedral, Oxford and Manchester Cathedral. 2007 saw his debut in Carnegie Hall with Theatre of Voices, giving the World Premiere of David Lang’s The Little Match Girl Passion, which subsequently won a Pulitzer Prize. He has performed this piece all over the world, including the Perth Festival in Australia and the Festival Internacional Cervantino in Guanajuata in Mexico. The Theatre of Voices recording of The Little Match Girl Passion won a Grammy Award in January, 2010.

Other engagements include the first performance of The Stones of the Arch by Gavin Bryars with the Kronos Quartet, Monteverdi’s Vespers in Tuscany with Philippe Herreweghe, and in Scandanavia with Paul Hillier and Concerto Copenhagen. He has made more than 50 recordings, including several of Dufay and Josquin, the Schütz Resurrection History with Ars Nova Copenhagen, Lassus motets with Philippe Herreweghe, the Bach Motets with Sette Voci and the 1575 Cantiones Sacrae of Tallis and Byrd with Alamire. With Theatre of Voices he has performed Stockhausen’s Stimmung, and also toured a programme of the music of Arvo Pärt – recorded for Harmonia Mundi in June, 2010.

Christopher is a member of The Tallis Scholars (with whom he has made more than 250 appearances), Tenebrae, Gallicantus and the Gramophone Award winning ensembles, The Clerks’ Group and The Binchois Consort.