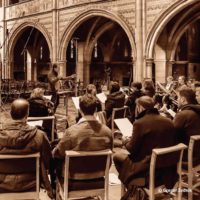 The Gaudete Ensemble was formed and directed by Margaret Rizza as a small parish choir for St Thomas’ Church in Sevenoaks. As it developed it went on to do many concerts and recordings. For these recordings the group was augmented with students and young professional singers from London. A CD of chants arranged and directed by Margaret Rizza made it to number 1 in the Classical Charts in 2007.

Eamonn Dougan first met Margaret Rizza while recording her works. In 2010 he directed the Gaudete Ensemble, now made up entirely of professional musicians, in the recording Mysterium Amoris which was released on the Naxos Label. Recorded in February 2020, Ave Generosa is also directed by Eamonn Dougan and features music published by the RSCM.

The Road Home – “The first word I wrote when listening to this album of a cappella American music was ‘perfection’” ★★★ (Ian Munro, RSCM, CMQ)