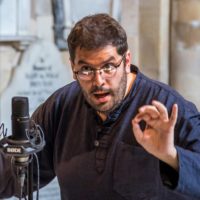 George Richford is a multi award-winning composer and conductor, living and working in Hampshire. He has been Director of Music at Romsey Abbey since September 2015. George was born and raised in South London and studied at Durham University and Christchurch Canterbury. George has held MD posts at Newcastle Cathedral, St John’s College, Durham, St Mary Magdalene Church, Newark and Dartford Parish Church. He has directed choirs to wide critical acclaim and has recorded and broadcast widely earning a reputation for reinvigorating and transforming choirs and for his success recruiting boys and girls. He is also the Director of Southampton University Chamber Choir.

His compositions have been performed and broadcast around the world, and have received premières on television and radio, at the 300th Anniversary of the Three Choirs’ Festival and for the Commonwealth Service of Remembrance for WW1 from Glasgow Cathedral. His music is published by Universal Editions, Music Sales Novello and Shorter House, London.