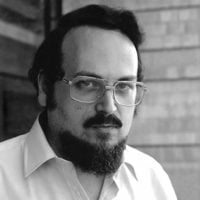 During his fifty-year compositional career, the American composer Arnold Rosner (1945–2013) produced a body of work that combined diverse influences into a powerful, distinctly personal musical voice. His catalogue comprises compositions in nearly every genre. These include three operas, eight symphonies, numerous works for orchestra and wind band. In addition there are several large-scale choral works, and many chamber, solo, and vocal pieces.

Rosner’s musical language is founded on the harmonic and rhythmic devices of the polyphonic music of the Renaissance and early Baroque periods. Listeners can find these roots, to a greater or lesser extent, in virtually all his music. To them he added a free triadicism and exotic modalities, intensified in some works by more contemporary harmonic dissonance. He combined this language with the lavish orchestration and emotional drama of late-nineteenth-century Romanticism. Rosner shaped his unusual language to embrace an enormous expressive range. This was far broader than one might imagine possible, from serene beauty to violent rage. This makes Rosner’s music worthy of serious consideration, rather than being merely an integration of earlier styles. Yet despite its fusion of seemingly incongruous elements, most of his music is readily accessible even to untutored listeners. Read more

Arnold Rosner was born in New York City in 1945. He took piano lessons as a boy and soon developed a voracious interest in classical music. Some sounds in particular appealed to him — juxtapositions of major and minor triads, as well as modal melodies. Before long he was working these sounds into music of his own. His family was fully aware of the remote prospects of success that a career in classical music composition offered. Consequently, they encouraged him to pursue more practical endeavors, and so he attended the Bronx High School of Science. He graduated at the age of fifteen, and then on to New York University with a major in mathematics.

But all the while he was composing: sonatas, symphonies, concertos and more. Not that anyone was especially interested in hearing the fruits of his labors. His composer-heroes at the time were Hovhaness, Vaughan Williams, and Nielsen. Their influence is evident in much of his earlier creative work.

He graduated from New York University before he turned twenty. Rosner then spent a year at the Belfer Graduate School of Science, continuing his studies in mathematics. But he was no longer able to resist the inner drive to pursue musical composition as his primary activity. So he entered the University of Buffalo the following September, with a major in music composition. This was in 1966, when serialism was the dominant style in university music departments. Young composers were often coerced, directly or indirectly, into adopting it. Rosner often recounted how the Buffalo faculty dismissed his creative efforts with varying degrees of contempt. Later, in describing his educational experience there, he would say that he “learned almost nothing” from these pedants.

Most of his peers capitulated to the pressure to embrace the style du jour. Rosner, however, was adamantly opposed to serialism. He stubbornly refused to accept a view of music that violated his most fervently held artistic values. And so, in response, his department repeatedly rejected the large orchestral work he had submitted as his dissertation. Realizing they would never accept the music he considered meaningful, he gave up the notion of a doctorate in composition. He decided instead to pursue a degree in music theory. His dissertation was the first ever on the music of Alan Hovhaness. Rosner completed this task successfully. He became the first recipient of a doctorate in music granted by the State University of New York.

Rosner devoted the rest of his life to writing the music that represented his personal aesthetic ideals. He supported himself through academic positions at colleges in and around the New York City area. His most enduring position was as Professor of Music at Kingsborough Community College (of the City University of New York). He he held the post for thirty years, until his death. During the course of his compositional career, his musical language gradually broadened and expanded from its idiosyncratic and intuitive beginnings. Arnold Rosner died in Brooklyn, in 2013, on his 68th birthday.

Arnold Rosner: The Masses – “The many technical challenges have been triumphantly surmounted by Hilary Campbell and Blossom Street in assured and committed performances” (Music web International)