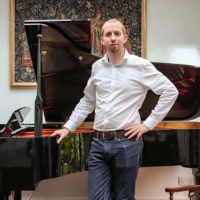 Harpsichordist and organist Joe Waggott trained on the Historical Performance master’s degree course at the Royal Academy of Music studying harpsichord and continuo.
Prior to this he studied organ at Royal Birmingham Conservatoire. He has worked extensively as both a continuo player and a répétiteur: recently with English Touring Opera as Head of Music Staff for the autumn 2018 season (Handel Radamisto, Purcell/Carissimi/Gesualdo Dido &Aeneas/Jonas/I will not speak, Bach St Matthew Passion), Barber Opera (Porpora L’Agrippina), ETO (Handel Giulio Cesare) and the London Handel Orchestra, where he was assistant conductor to Laurence Cummings (HandelFaramondo), along with other period instrument ensembles around the UK.
Joe is currently studying for a Doctorate at Royal Birmingham Conservatoire, funded by the university’s STEAMhouse centre, researching the music of Marc-Antoine Charpentier in 17th century France.
As an organist he has been involved with several premier recordings of new works, including music by Jonathan Dove and a disc of music by American composer Carson Cooman, both on the Convivium Records label.
Joe is a prize-winning holder of the diploma of Associateship from the Royal College of Organists, a first prize winner of the Royal Academy’s Nancy Nutall Early Music Prize and a recipient of the John Campbell keyboard prize from Royal Birmingham Conservatoire. Based in London, he is currently Organist to Forest School, Snaresbrook and Director of Music at St Mary’s with Christ Church, Wanstead. He is also an assistant conductor to the National Children’s Choir of Great Britain.
Adrian Green2019-05-18T10:26:47+01:00