Cecilia McDowall: The Girl From Aleppo

The Girl from Aleppo is the story of Nujeen Mustafa. It was written by Christina Lamb, upon which Kevin Crossley-Holland based his libretto, that has been set to music by Cecilia McDowall. Performed by the National Children’s Choir of Great Britain.

“Through the story of one exceptional, wheelchair-bound, young Kurdish refugee from Aleppo, Nujeen Mustafa, I feel I can begin to understand some of the terror, the distress and helplessness experienced by those driven from their homes by the horror of war. As composer I felt it important for the music not to obscure the text in any way. But to allow the words to tell the story, from despair, through hope and ultimately (and surprisingly) joy.” – Cecilia McDowall

Wherever one looks, innocent children are caught up in conflict. During these last years, thousands of child refugees have trekked from Syria, through Turkey to Europe in search of asylum.

One of these children was Nujeen Mustafa, a remarkable Kurdish teenager with cerebral palsy. She had never been to school – but taught herself fluent English by watching American soap-operas. War drove Nujeen from her home in Aleppo at the age of 16. Her elder sister Nasrine pushed her 3593 miles in a rickety second-hand wheelchair across nine countries to Germany. They navigated rough seas, people-smugglers, bumpy fields and hostile border guards. Nevertheless, Nujeen remained with a smile on her face. She chatted about her dream of becoming an astronaut and the things she had learnt on TV.

Her remarkable journey was followed by the journalist Christina Lamb (co-author of I am Malala). Christina subsequently co-authored Nujeen’s dramatic story in her biography ‘The Girl from Aleppo’.

This five-movement cantata by Kevin Crossley-Holland retells that story. Nujeen’s experience unfolds in the musical narrative; chorales, haunting vocal solos, intense violin solos, restless choruses and body percussion. These all drive a course from country to country to arrive, thankfully, in Germany. In brief, it is a journey of hope and extraordinary fortitude against all the odds.

The National Children’s Choir of Great Britain commissioned the cantata Everyday Wonders: The Girl from Aleppo on its 20th Anniversary. It was first performed by the Choirs in Birmingham Town Hall on 10 August, 2018. Harriet Mackenzie played violin, Claire Dunham on piano and Dan Ludford-Thomas conducted.

We are most grateful to Christina Lamb for bringing this extraordinary narrative to us in her book, The Girl from Aleppo. And to Nujeen Mustafa herself, whose story it is. 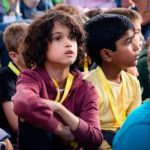 The National Children’s Choir of Great Britain was founded in 1998 by Lissa Gray. Her vision was that talented young singers from throughout the United Kingdom would have the opportunity to work together and enjoy making music under the guidance of inspired teachers. Young singers audition from ages 9–19, and each choir member is encouraged to develop their ability within a supportive environment. A focus on musical excellence is accompanied by a holistic approach to the choir members’ well-being that allows them to flourish both musically and personally during courses.

Dan Ludford-Thomas, who was appointed Musical Director in 2018, is committed to taking the choir forward by combining this ethos with his aim to confirm NCCGB as a leader in the delivery of vocal and choral training for children and young people, with innovative programming and the opportunity to work with leading musicians and composers.

The Girl from Aleppo project has been an inspiration to everyone involved: musically, choir members have benefitted from the experience of working with Cecilia McDowall and the outstanding team of musicians; and personally, we were all able to learn from Nujeen’s courage, determination and optimism in the face of adversity.