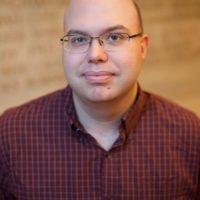 Carson Cooman (b. 1982) is an American composer with a catalog of hundreds of works in many forms. These range from solo instrumental pieces to operas, and from orchestral works to hymn tunes. His music has been performed on all six inhabited continents in venues that range from the stage of Carnegie Hall to the basket of a hot air balloon. Cooman’s music appears on over forty recordings, including more than twenty-five complete CDs on the Naxos, Albany, Artek, Gothic, Divine Art, Métier, Diversions, Convivium, Altarus, MSR Classics, Raven, and Zimbel labels.

Cooman is a graduate of Harvard University and Carnegie Mellon University. His primary composition studies were with Bernard Rands, Judith Weir, Alan Fletch- er, and James Willey. In 2006, Cooman was appointed Composer in Residence at the Memorial Church of Harvard University. As an active concert organist, Cooman specializes in the performance of contemporary music. Over 300 new compositions by more than 100 international composers have been written for him. His organ performances can be heard on a number of CD releases and more than 2,000 recordings available online. For more information, visit carsoncooman.com